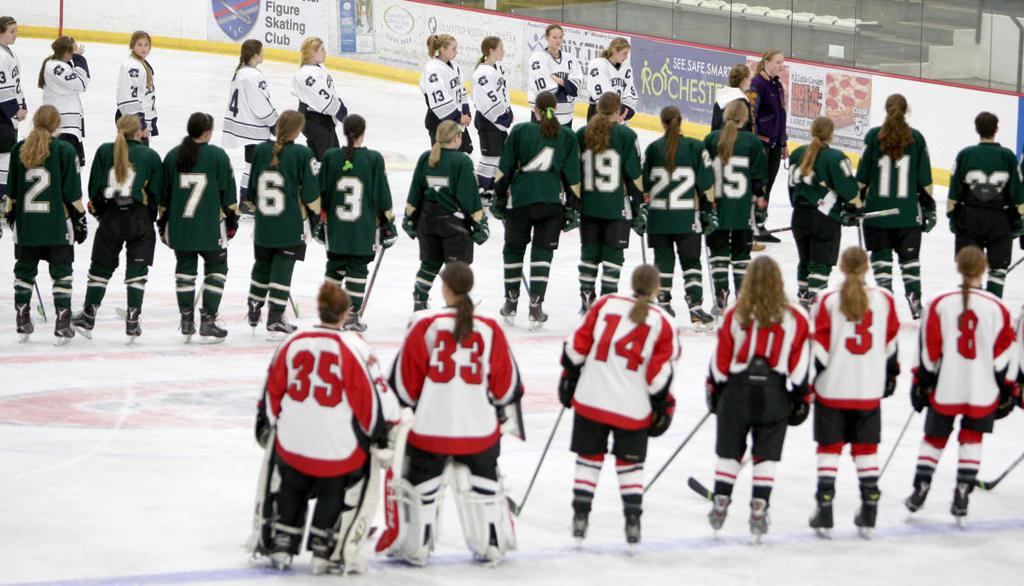 It's also loaded with youngsters.

And the Spartans don't have a lot of players in between.

The seniors took center stage on Thursday, and with the help of their younger teammates, picked up their first victory of the season, beating cross-town rival Rochester John Marshall 6-3 in a Big Nine Conference girls hockey game at the Rochester Recreation Center.

"We had some good communication and a lot of players step up," Mayo senior forward Brooke Leone said. "A lot of girls learned a lot and it's always fun to play a cross-town rival. You never know what's going to happen."

The Spartans have 10 seniors on the roster this year, as well as eight freshmen and three eighth-graders.

"Praticing day in and day out, we're starting to mix a little bit," Leone said. "We've found some chemistry, which is nice, and we're getting people to the net after we get a shot off and that's what's brought us success."

Leone scored the only two goals of the first period, but after Adair's first of the night, JM's Ally Halverson scored twice in the second to pull the Rockets within 3-2.

Adair answered just 23 seconds after Halverson's second goal, making it 4-2. Augeson then scored with 2:26 to go in the second for a 5-2 Spartans lead after two.

"These girls have been together for four years at Mayo and in youth hockey before that," Mayo coach Mike McCormack said of his seniors. "There's some pretty good chemistry with them. And (freshman) Devynn (Priest) is younger than them, but she plays like a senior."

Leone capped her hat trick 4:04 into the third, and JM freshman Alyssa Kang's first varsity goal at 6:59 of the third finished the scoring.

"We had a very young defensive corps tonight, with some seniors out, and we had a senior step up who usually plays forward (Madi Riese) and play very well," McCormack said. "We have so many young girls and some girls have really surprised us.

JM (0-1-0, 0-2-0) received a strong effort from its line of Halverson, Kang and Ashley Koehler. They acounted for all of the Rockets' scoring and helped JM put 33 shots on goal, just one less than Mayo.

"It's a good game for us," JM coach Josh Chapman said. "The girls came out, played really hard in the last two periods. We played well enough to win, but just didn't have the bounces."

"Our effort was there (Thursday)," Chapman said. "We had a slow start, but in the second and third periods we were even with them and I thought we outplayed them at times. Our third line (Morgan Sammon, Katherine Wheeler, Delaney Adams) had chances down low off rebounds. Shots were even, the girls worked hard ... we just didn't have the puck luck."

It was Shannon O'Hara Night at the Rec Center on Thursday, as players from Rochester's girls high school hockey teams presented checks to the Shannon O'Hara Foundation prior to the start of the Mayo-JM game.

O'Hara died at age 12 on Jan. 6, 2012, after a nine-month battle with an inoperable brainstem glioma tumor. She was a multi-sport athlete, known for keeping the locker room upbeat. Her favorite color was lime green; several players from both JM and Mayo used lime green stick tape Thursday.

This year's seniors are the last players to go through Rochester's high school programs who played youth hockey with Shannon. O'Hara's parents, Dan and Jennifer, were present to accept the donations to the foundation, which will top $150,000 in all-time donations this year, Jennifer O'Hara said.

The foundation annually presents scholarships to a handful of high school hockey-playing seniors in Rochester.